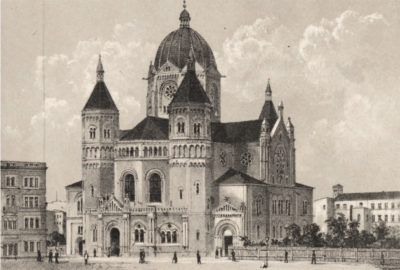 I began researching my family history in the early 1980s – after the death of my father (1978) and his brother (1982). I realized that there was no longer anyone of my father’s generation who could tell me about his family history, and I became determined not to let this happen with my mother’s family; a task that has remained my focus for much of the past 40 years. For most of this time, my father’s family history has remained a mystery and I only began to seriously research it in the last 5 years. This was made easier by the many online resources available today as well as genealogy through DNA testing. I will present the results of my research as well as some surprises that DNA provided to me.

The picture shows the New Synagogue in Breslau, Germany which was opened in 1872; one of the largest synagogues in the German Empire, it served the liberal Jewish community. My parents lived in Breslau prior to World War II and they attended this synagogue, which was completely destroyed during the Kristallnacht pogrom 9-10 November 1938. My father was employed by the Breslau Jewish Community until my parents fled Germany in 1939.

The Jewish Genealogical Society of British Columbia (JGSBC), a non-profit organization, brings together people who are interested in pursuing their Jewish ancestry or family history. Together with the Jewish Museum and Archives of BC we try to restore the history and family links that time has erased.

While there are many resources available on the internet, their use does require some skill and training. Many traps await the unwary: name changes, spelling errors, the same name for two different people, the many vagaries of census takers, clerks and other takers of record. The difficult task of digitizing the records has led to other errors creeping in. We will help you to avoid those pitfalls and develop an accurate and descriptive family tree. If you are interested in joining us, you can pay for a yearly membership here. Any questions? – send us an email.

This site also has links to resources (including Jewish newspaper archives) that we have found useful in our research.